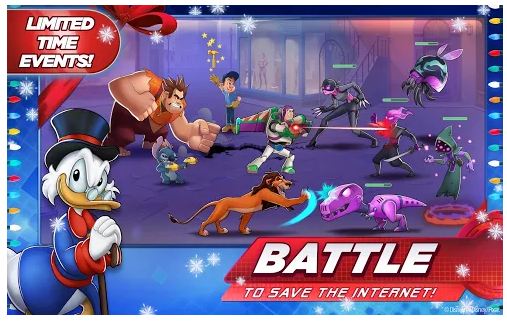 This set of the classic Disney plus apps introduces you to the fantastic world of fun and excitement of the well-known Disney world. You have not only games that bring on stage the famous Disney characters but also the entire regalia of this great attraction. This collection also contains apps that help you plan your next visit to the Disney Resort, check the latest attractions, plan your meals at your favorite Disney restaurants, check wait times, buy tickets and a lot more. 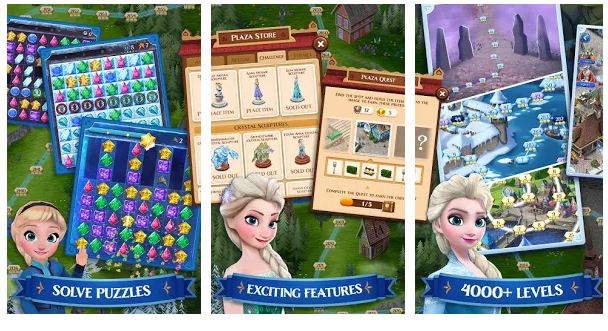 This Disney Plus puzzle matching adventure enlivens the Kingdom of Arendelle for you. There are your favorite characters such as Anna, Elsa, Olaf and a number of others too to inspire and delight you with their epic adventures. There is no virtually no limit to its extensive range of levels and it engages you for hours. This Disney Plus app has been developed taking inspiration from the famed Disney’s Frozen. There are regular new updates that always maintain its charm. 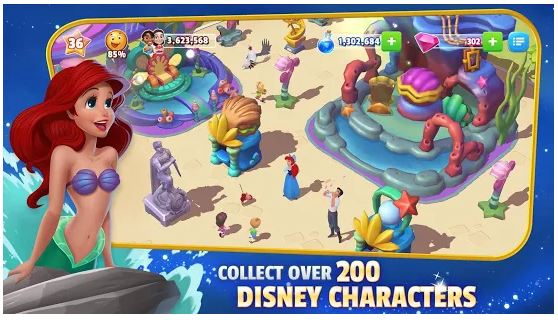 This wonderful app allows you to enter into the virtual dream world of Disney with all its regalia. It unleashes the world of an endless adventure filled with the mesmerizing attractions and events to inspire you. There is massive range of characters that staged Disney world for a period prolonged over 90 years. This app is the choice of over 90 million players across the world and it is enough to prove the immense delight and fun it brings to you. Disney Magic Kingdoms also allows you to customize options and create your own dream park. 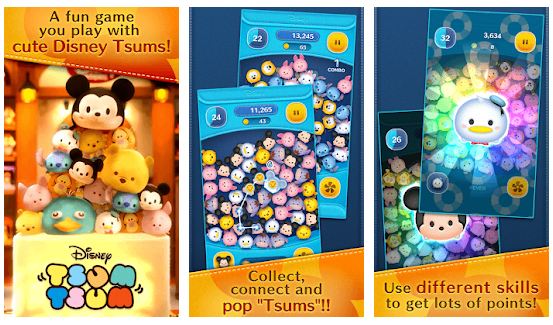 Disney Tsum Tsum is an enticing puzzle game ever introduced in the Playstore. Like its name, every feature of this Disney Plus app is exciting and inspiring. It has been downloaded by a whopping number of over 70 million people worldwide! Being a free Disney Plus app makes it more attractive along with its fantastic character Tsum Tsum. Designed on the famous Disney Tsum Tsum plushes like Mickey Mouse, it will definitely a worthwhile choice for you to spend time with the best amusement. 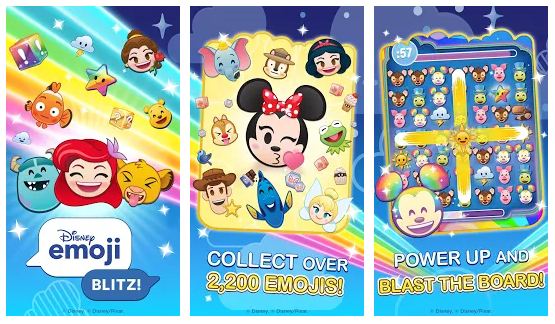 This Disney Plus app invites you to hunt for Disney, Pixar and Star Wars emojis that have you never seen before. Disney Emoji Blitz is full of fun that an enticing matching can deliver to you. You have to accomplish certain missions and win rewards for each step. There is a lot more for you to explore in your favorite games such as The Lion King, Cinderella, Zootopia to name just a few. It also features chat with a variety of emojis and allows you pose challenge to friends. 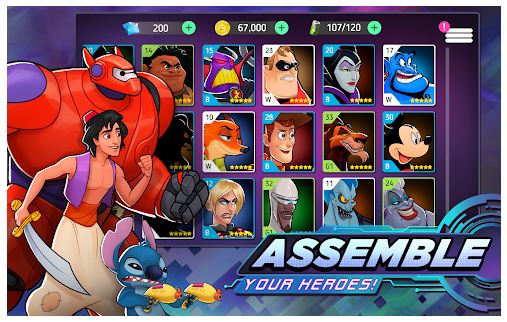 It introduces battleground replete with gigantic heroes from blockbusters like The Incredible, Tron: Legacy, Robin Hood, Pirates of the Caribbean Toy Story and many such others. The scenes are exiting and full of thrill which never let you feel bored. It offers you multiplayer RPG competition that allows you combat and collect rewards to satisfy your knack of competing with difficult and dramatic situations. 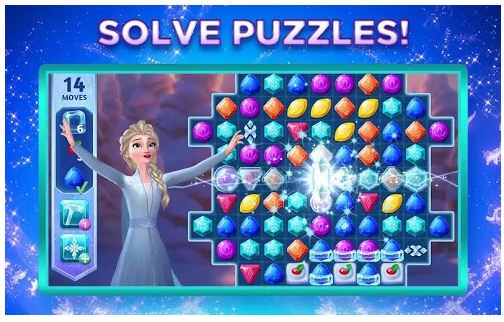 Disney Frozen Adventures is an epic frozen game that invites you to explore the incredible and fantastic frozen world of Arendelle. To make it more alluring, the app allows you customization options to accentuate the fun of the frozen world. Introducing three enticing puzzles with hundreds of level, it offers you a never-ending amusement. You meet frozen world characters who stage the entire action whereas your successes bring you rewards in form of snowflakes to adorn your castle. 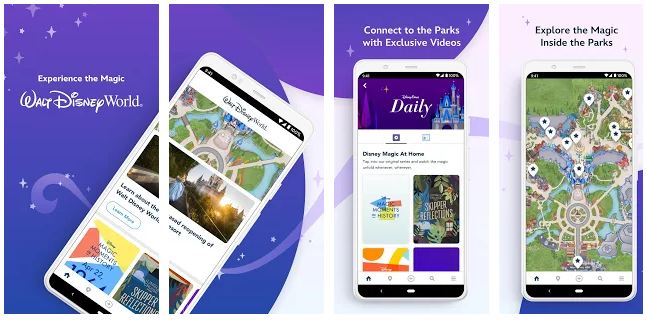 This fine app comes from the official Walt Disney World and helps you plan and fill your free time with fun and pleasure. There is an endless extravaganza for you to explore spreading over a variety of park hours, Character greetings and parade show times. This app also offers you GSP-laden maps to search for Walt Disney World Resort and its multiple attractions when you are on the go. 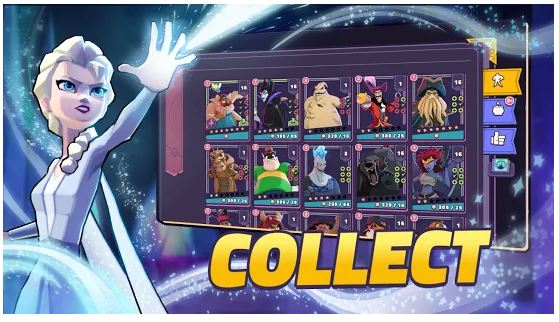 This Disney Plus app for Android is a special treat for those who love battle games and want to test their potential of making war strategies. Disney Sorcerer’s Arena features an engaging scenario that stages the fabulous world of Pixar legends. The action-packed PVP arena provides you the opportunity of participating in the Club Conquests and spending your leisure time in the best gameplay experience. Get ready to meet the challenge of this exclusive strategy demanding Disney Sorcerer’s Arena. 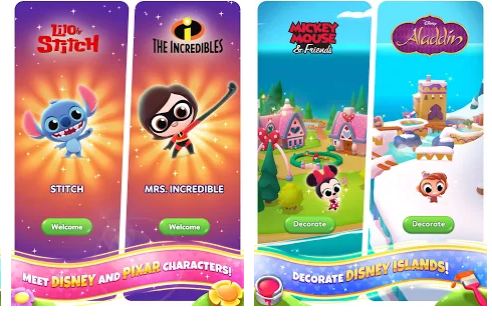 Disney Getaway Blast is designed exclusively with Disney and Pixar characters that involve you into a fantastic world. It stages a scenario that engages you in matching and popping bubbles and resolve puzzles. As you successfully pass through various stages of this game, you collect enticing rewards that doubles the pleasure of gaming experience. The game features building an island in the magical Disney world. This app also allows you to share your best gaming moments with friends. This fine app will surely be a valuable addition to the collections on our Android device. 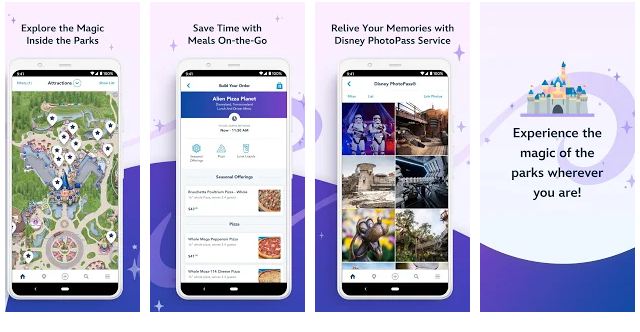 This is the official app of the great Disneyland Resort to help you plan your visit. Being this app on your Android device, you can easily check wait times and buy tickets of all attractions of the resort. It also contains maps and other essential information which makes your visit easy and more hilarious. You can plan dining plans by accessing the menus of different restaurants. With the help of this app, you can find out all Disney characters without any hassle.

Disney Plus apps for Android are not only filled with an unending mirth and pleasure but they also unleash a challenging world that demands your abilities of making war plans and strategies. Thus they do not bring merely a gaming experience but also sharpen your cognitive skills. 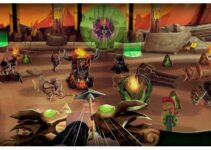 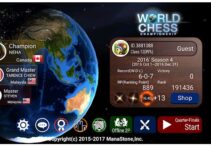